The website of Mike Brooks
Writing right and righting wrong

My debut novel The Machine Society – published in 2016 by Cosmic Egg – is a sci-fi thriller set in London in a dystopian future.

Read the start of my novel The Machine Society 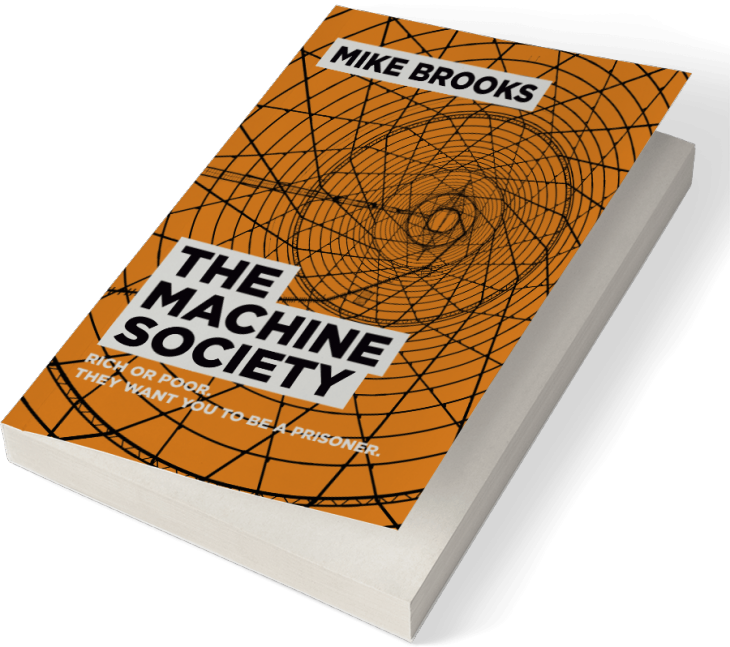 Head-u-cation: Exclusive short story set in the world of The Machine Society

Who is Erich Vinty? Profile of the discredited scientist

In the aftermath of nuclear war and climate meltdown, the walled city of New London is a two-tier society. The poor live in the Perimeter and are debt slaves holding down soul-destroying jobs, their lives filled with fear, barely capable of human interaction. The rich elite live in plastic luxury in the Better Life Complex. All are unaware of the sinister secrets that underpin their world.

Dean Rogers lives in the Perimeter, afraid that if his debts spiral out of control he will be taken in the middle of the night and cast out of the city, and outside of the Security Wall.

My aim in writing The Machine Society was primarily to entertain: to create a story filled with thrills and spills, mystery, comedy and romance. At the same time, it's a satire on modern life that sets its targets on consumerism, branding and virtual reality.

It's also an attempt to present an allegory of the spiritual and psychological search for freedom. Indeed, I considered inventing the new genre of ‘psycience fiction' to describe my novel (science + psychological = psycience).

Praise for The Machine Society

’A thoroughly gripping and highly intelligent novel, with a wholly plausible, perfectly imagined future – a warning of where present cultural trends may take us – all underpinned with philosophical speculations on the nature of freedom.’

Steve Taylor, author of The Fall and Back to Sanity

’Wow, I'll just take a breath. I need to after reading this book. I loved it. I really enjoy dystopian books when they are well thought out and well written, and this one most certainly was in my opinion. I honestly thought it was one of the best dystopian books I have read in a very long time.’

‘Thoughtful and captivating. A powerful portrayal of a city that's lost its soul. Brooks' vivid depiction of a dystopian future provides a stark critique of modern culture but ultimately a message of hope.’

‘I couldn't put it down and found myself going into the future and this world in my day dreams and dreams - mark of a good book! I found it well written with compelling thought provoking ideas, many of which could be entirely possible.’

‘I thoroughly enjoyed this near future London-based science fiction adventure. It has a well paced plot with plenty of turns and a cast of believable and sometimes quirky characters. It is also, in places, really quite funny, and sexy without being graphic. One of the stars of the novel is New London itself - and the frightening thing is that the London of the future as Mike Brooks sees it is becoming increasingly possible.’

‘This was a page-turner from the outset. Invited into Dean's mundane world you rebel with him against the status quo. There must be more to life than this turns out to be true on so many levels... Insights into the complexity of the human psyche added interest and colour to a gripping tale.’

‘The plot is tight, the characters subtle and believable, and the concept and premise entirely plausible, all the time with an element of hope. It all makes for a very compelling read.’

Distributed to the trade by National Book Network in US; by Orca Marston in UK.