The website of Mike Brooks
Writing right and righting wrong

The premium home school app for The Better Life Complex

Welcome to Share-view! Talk to your friends and learn together.

Note: Learning new facts or knowledge not guaranteed. Usage of Head-u-cation may result in lowering of IQ. Subscription non-refundable.

Dad’s told me about the internet and how everyone used it all the time, before it died. Now there is Share-View, so I want to find out what it’s all about. It seems pretty fecund so far.

I’m going to be writing about my life, and maybe do some investigation as part of the Journalism syllabus on Head-u-cation.

Let me introduce myself: my name’s Michelle Watts. The French name was Dad’s idea.

I’m 13. I live with Mum and Dad. No brothers or sisters. I spend most of my time on Head-u-cation. Mum said school’s too expensive. But, anyway, from what I hear, all they do in school is work through Head-u-cation, same as I do. It would be good to make some new friends, though, so I’m looking forward to meeting you on Share-view.

What do you think about life in the Complex? I think it’s mostly barren. I’m not allowed out much – Mum and Dad say I’m too young. They spend most of their time arguing about credits and sales, or else they’re out networking. They spend hours perfecting their personal brands, taking all the pills and even getting surgery.

Anyway, it sounds like I’m moaning, so I’ll stop there.

If you’re reading this, please reply!

I haven’t heard from anyone. Is there anyone out there in Head-u-cation land?

I know I’m different. Most of my friends don’t play any of the serious games like Head-u-cation. When I have sleep-overs, all they want to play is shooting games, all the Krane Media stuff, but I think they’re mostly barren. I like science. I even learned French. I told you how my Dad called me Michelle. He loves France. He used to talk about it a lot, and I’d ask him questions.

France was a country close to England, over a sea called The English Channel (I wonder if the French called it The French Channel?). That’s what you call a moot point because France is flattened now – like everything else outside of New London, outside of The Wall.

Sometimes, when Mum and Dad are out, I set the wall-surround screens to Paris: the Eiffel Tower, L’Arc de Triomphe, Louvre – famous buildings in Paris, all gone now. I like to sit there – the sofa becomes a bench by the River Seine. I wish I could really do that, go back to Paris like it was years ago, when it wasn’t too greenhouse to go outside and the rain wasn’t poisonous yet because it was before the radiation. It must have been fecund to able to go outside, not being stuck inside a massive dome all the time. But the London War stopped all that.

There’s something not right about how people live here in the Complex. When I watch history programmes about how things were 50 years ago, I look at the concerts and the parades, the sports and the street parties – and I wish I could have lived back then. But that’s called nostalgia, and Head-u-cation says it’s bad because the future is better. What do you think?

I don’t think anybody’s reading this. According to Head-u-cation, this is a shared space. But I can’t believe I’m the only one using it, so why has no-one contacted me?

Hello! Can anyone hear me?

Maybe I’m writing for myself. If so, that’s ok. It’s good practice. I want to be a writer, even though Mum says no-one reads anymore. She might be right. My friends don’t read, and I don’t think their parents do either. The only thing Mum reads is the fashion updates. She’s obsessed with clothes and whether what she’s wearing’s in fashion this week. Oh, and she’s always arguing with Dad and she always has to be right.

They had a massive row last night. Mum accused Dad of going to the Fantasorium, which she said is for perverts. I thought the Fantasorium was just a virtual reality game. Anyway, Dad denied it. I just stayed out of the way – I learned to do that ages ago.

I don’t know if I’m changing or if they are. Over the last year they’ve gone more and more narco. Mum can’t sit still – she’s always fretting. Dad is mostly miles away – we don’t chat much anymore. I reckon it’s all the pills they take – ‘Youth-Anasia for beautiful skin’, ‘A Breath of Fresh Hair’ – they’ve all got barren names.

Adults have got this idea of what perfection looks like, then everyone ends up looking the same, like fashion store dummies. Plastic. In the old films they show on Head-u-cation, people had wrinkles, which they used to call ‘character’.  My ambition, when I grow up, is to have character.

Mum won’t stop talking about the Fantasorium. She said Dad was having an affair with his French girlfriend. (What does she mean?)

Dad said that was a long time ago, long before he met Mum.

Mum said she bet he wished he’d stayed in France.

Dad said he hadn’t wanted to, he’d left her for Mum and, anyway, she would be as flat as Paris now.

That made Mum laugh for some reason. But then she got angry again and said she wished Dad would go and join her (sometimes she makes no sense.) Then she said she would have left Dad by now if it wasn’t for all their debts and the risk of losing the apartment.

That upset me, but I didn’t show it. What would happen if they split up – who would I live with?

And if we lost the apartment, would that mean leaving the Complex? Going to the Perimeter? How do people even live out there, in the sun, with the rain? But they do, somehow, and they survive, so there must be a way.

And then there’s The Wall, but we’re not supposed to talk about that. I saw a doc on Head-u-cation about how barren it is beyond The Wall. They showed a girl, the radiation had made her head all big and her arms all long, and she was in pain. There were cats and dogs that had become like monsters. They were only computer recons but they were terrifying.

Why is Dad going to the Fantasorium? Mum said she’d been checking Dad’s credit account and knew he’d been there. It must be true because why would Mum lie? But I don’t get it. If the Fantasorium’s only a game, then how can Dad be having an affair if it’s virtual? Adults are completely barren sometimes.

Anyway, I’ve decided I’m going to investigate the Fantasorium. This can be my first proper journalism assignment.

Is there anyone out there, or is this fake too?

This is a WARNING to anyone reading this: KEEP AWAY FROM THE FANTASORIUM.

Yesterday, after Mum had gone networking, I kept an eye on Dad – he was getting more and more narco, it was totally barren. His eyes didn’t seem focused. Eventually, he said he was going out. I asked him where. He mumbled something, but I couldn’t make it out. When he left, I followed him. He went straight to the Fantasorium at the other end of the Complex. It’s massive: a giant wall of swirling purple and black, just like the adverts.

Standing outside, there were men in huddles, talking in low voices, some of them moving from one group to another. Sometimes a conversation would get louder, like an argument, but then they calmed down again.

Dad stumbled up to one group and showed them his tablet. It looked like he was pleading with them. They shook their heads. He moved to another group. Eventually he must have got what he wanted because he turned and rushed to the main entrance into the Fantasorium.

I got closer to the groups. They didn’t pay me much attention. It helps that I look so young; I haven’t had any surgery yet so I look a lot younger than most 13-year-olds.

Here are some of the things I heard:

‘That’s enough for half an hour.’

‘Yeah, but only 9 more credits gets me an hour.’

‘You still got any Krane Media games?’

‘Frack! Last time was so good.’

‘Don’t, brother, don’t! I’ve only got 5 credits left. We need another novvy like that last guy.’

‘They’ve got it the worst. The ones with credit who are new to it. Too much too soon. They flip out.’

I don’t know what all of this means. Only that it’s not fecund.

Dad’s not home yet.

I got a message!

Well, kind of. It was an advert – automated, I suppose.

At least it shows someone or something is reading my posts, even if it’s just a computer program.

It cheered me up after all the arguing and shouting last night. Mum threw a cooked ready-meal at Dad – with the lid off – and it went all down his bare arm. It must have scalded him, but he just shrugged like he was half asleep. His eyes were half-shut and he was staggering about. It was barren. Mum said it was proof he was at the Fantasorium again and said he needed medical help. She wasn’t angry this time, just sad.

Weird that the advert I received was from the Fantasorium. Here it is: 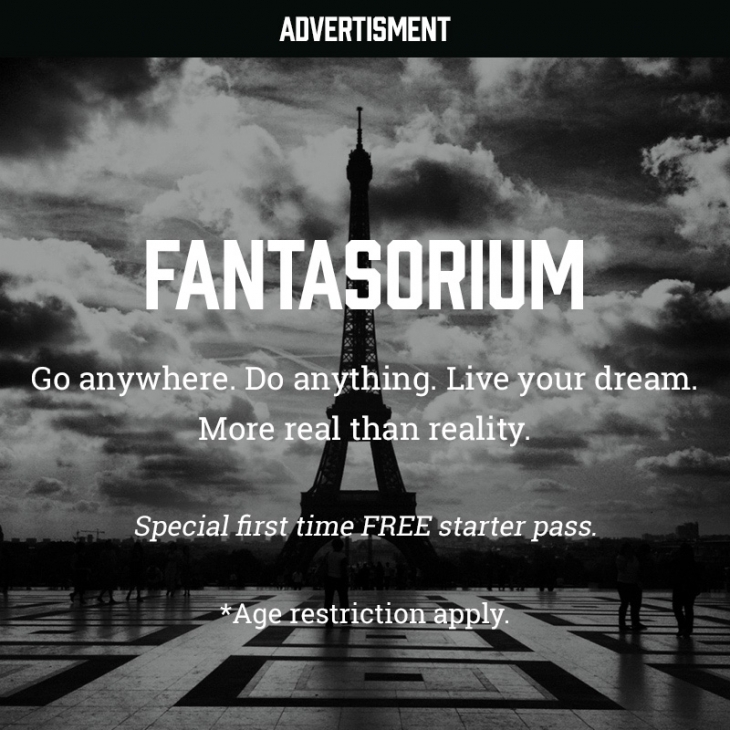 See that tower in the advert? That’s the Eiffel Tower, from Paris. Now, I know what I said before, but if what they say is true about the Fantasorium – or even only half-true – then I guess it must be miles better than our wall-surround system. I could really go to Paris! Imagine – visit the art galleries – climb the tower – talk French to actual French people! I know they won’t be real but, right now, that would be a lot better than what’s going on at home. And I can do more journalism.

Something not right in Paris.

The head they put in you

Not even reall. Need more credi.